Kamal Hossain (fictitious name) (34), a Bangladeshi returnee from Germany, is from a poor family in Patuakhali's Golachipa sub-district. Kamal could not afford higher education and he started looking for work at a young age. Unfortunately, he was not able to secure a stable job. He tried to start his own business - asking his parents for start-up funds, but they were not willing to support Kamal’s entrepreneurial endeavors.

Down on his luck, Kamal met the immigration middleman who had helped his cousins travel abroad. The middleman convinced Kamal that work in the Middle East would be an answer to his and his family’s woes. Captivated by the idea, Kamal’s parents sold some of the few assets they had and took a loan to pay the middleman BDT 300,000 to send Kamal abroad.

Kamal arrived in the Abu Dhabi, UAE in 2008 to work as an electrician. Unfortunately, his employer did not pay him the wage he was promised and for two years he barely earned enough to survive. It became clear to Kamal that his work in the UAE would not resolve his financial difficulties, and he contacted the middleman who agreed to facilitate his movement to Germany. Kamal’s journey to Germany was not straight forward, enroute from the UAE he traveled through Oman, Iran, Turkey, Greece, Romania, Siberia, Croatia, and Austria. The middleman repeatedly took advantage of him on this journey, and his family was forced to pay for his safe passage multiple times. Kamal ultimately arrived in Germany in 2014 but found that he could not work due to his lack of legal papers.

On 26 June 2018, German authorities deported him to Bangladesh on a chartered flight. No one from his family greeted him at Dhaka Airport. However, the Prottasha support team met him at the airport and helped him get home safely.

After returning to Bangladesh Kamal found himself in a difficult situation. Not able to find a job or support his family, he became quite depressed – and at times contemplated taking his own life. Shahidul Biswas, a Field Organizer at the Reintegration Service Centre (RSC) in Khulna, heard about Kamal from a neighbour. On 28 January 2021, Shahidul spoke to Kamal over the phone and informed him about the Prottasha project's support.

RSC Khulna developed a tailored reintegration plan for Kamal in early 2021, including psychological counselling. As part of the economic reintegration plan he decided to open an oil and lubricant store. On 15 June 2021, the Prottasha project provided Kamal with some tools and equipment needed to start the business.

Kamal now earns an average of BDT 15,000 a month and has settled down as a confident person.

"I am eternally thankful to the Prottasha project," he said, expressing his gratitude. “The project provided incredible support which vastly improved both my mental and financial wellbeing. I am blessed by how the situation turned out. "

“The fact is, I could have achieved more if I had been given the chance to do something in Bangladesh from the beginning,” Kamal remarked. “The money I spent on migrating could have helped me start a business here at home. I wasted ten years of my life.”

Some parents, especially those in rural areas, believe that sending their sons abroad will solve their financial troubles. They often invest money trying to send their family members abroad, while that money would be better spent investing in their families’ futures in Bangladesh.

Kamal Hossain also has a message for aspirant migrants, 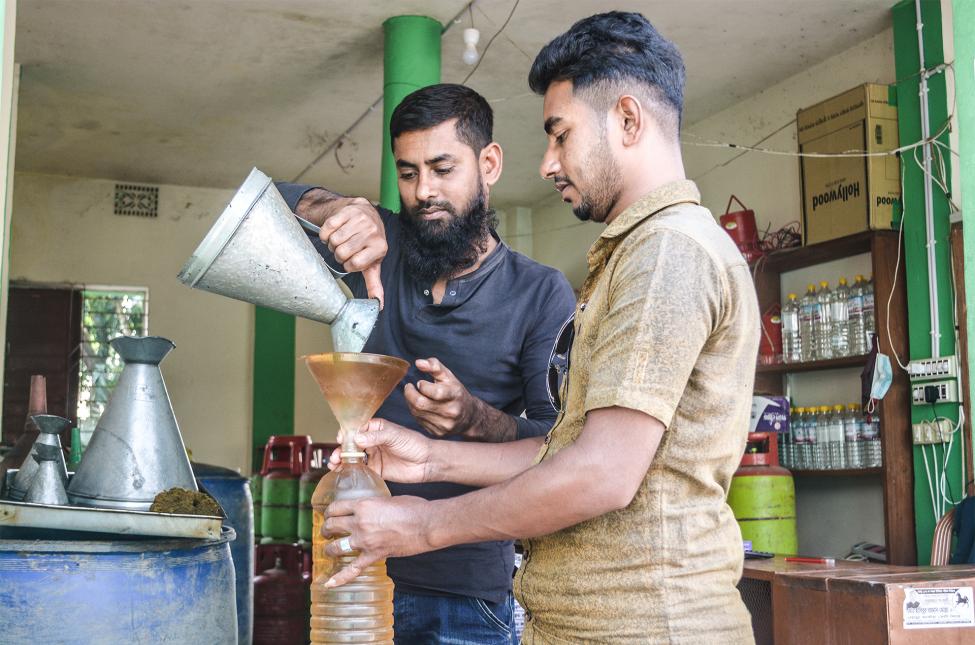 Irregular migration is a dangerous waste of money and time. Your life is worth more than that, so don't gamble with it.

Volunteers Gaining Skills to Save Lives