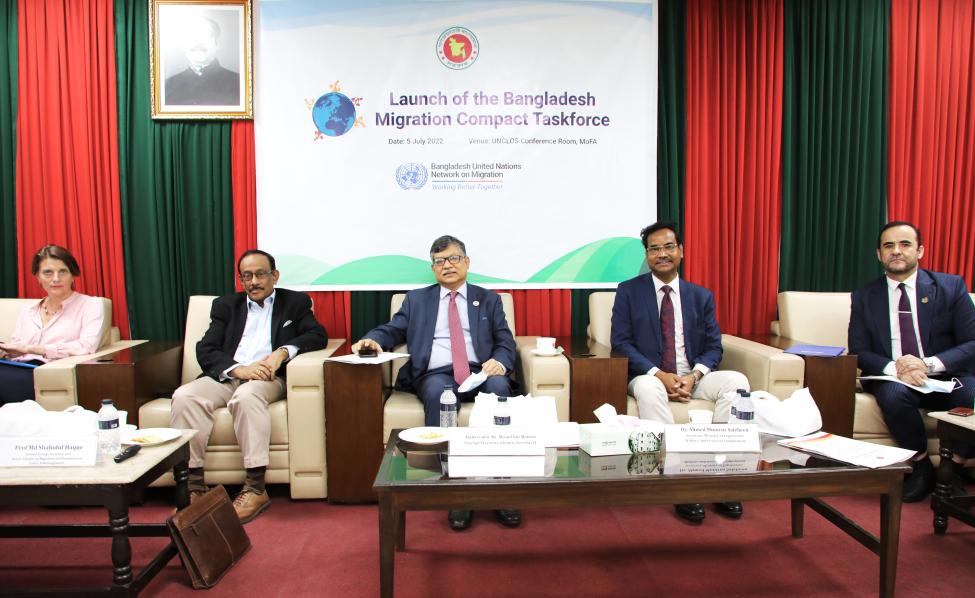 05 July 2022, Dhaka: The Government of Bangladesh (GoB) launched the Migration Compact Taskforce (Taskforce) which aims to facilitate the implementation, follow-up, and review of the Global Compact for Migration (GCM). The Taskforce will provide a platform to ensure full support and cooperation from all relevant stakeholders through a ‘whole of government’ approach.

Today, senior GoB officials and officials from participant United Nations agencies of the Bangladesh United Nationals Network on Migration (BDUNNM) were present at the launch event held at the Ministry of Foreign Affairs.

Following up on the commitment of the GoB and with the support of the BDUNNM, a recommendation was put forward for the formation of an inter-ministerial coordination mechanism to lead and support the implementation, monitoring, and review process of GCM. The launch of the Taskforce marks an important step reiterating this commitment from the government while recognizing the continued efforts of Bangladesh as a Champion GCM country.

At the event Bangladesh's Foreign Secretary, Masud Bin Momen, said, "Bangladesh has consistently pursued the issue of migration as a top priority in its diplomatic engagements at the bilateral, regional, and multilateral levels. We would remain committed, despite the difficulties experienced in the last two years and more, to meaningfully deliver on our recognized role as a ‘Champion Country’ for the Global Compact for Migration (GCM)." 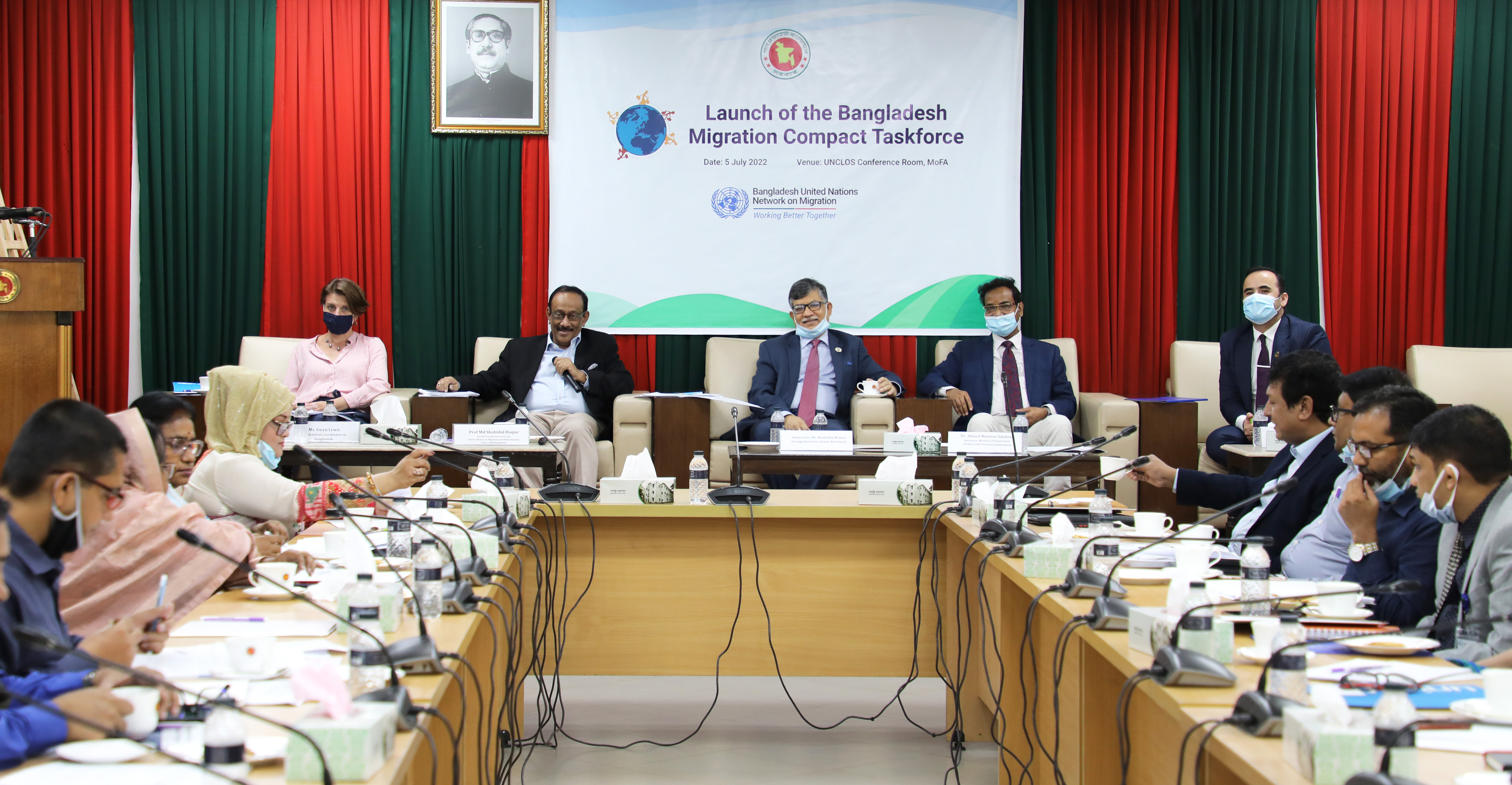 Dr Ahmed Munirus Saleheen, Secretary of the Ministry of Expatriates’ Welfare and Overseas Employment, added "we have sent more than 13 million people abroad in the last 50 years. These migrants have contributed to our nation’s development. Migration is complex and multidimensional, and the GCM is a global tool that supports us to manage it safely and with dignity for migrants. The Taskforce launched today will help us with this concerted effort. It will provide a consultative space for policy and decision-making coordination, information exchange and peer review."

Presenting at the taskforce launch Professor Shahidul Haque, Senior Advisor to IOM, gave an in-depth overview of the Global Compact for Migration reiterating the significance of this first-ever inter-governmentally negotiated agreement on a common approach to international migration in all its dimensions. He also recalled the prominent role played by Bangladesh in advocating for the Global Compact on Safe, Orderly and Regular Migration and stressed on the need for a concerted effort to make the inter-ministerial mechanism initiated through the Taskforce to be effective and contribute to improved migration governance in Bangladesh.

Gwyn Lewis, UN Resident Coordinator in Bangladesh, said, "The Government of Bangladesh has not only recognized migration as a development tool, it has also included it in its development planning showcasing this through the mainstreaming of migration in the 8th Five-year Plan. This Taskforce is another step forward in our joint efforts to ensure the safety, dignity, and human rights of all migrants and effectively govern migration.”

The United Nations (UN) established a UN Network on Migration at the global level to ensure effective, timely, and coordinated UN system-wide support to Member States in their implementation, follow-up, and review of the GCM. Abdusattor Esoev, IOM Bangladesh’s Chief of Mission and Coordinator of the BDUNNM, stressed that "migration provides immense opportunity and benefits – for migrants, host communities and communities of origin. However, when poorly regulated, it can create significant challenges. The GCM leverages the overall benefits of migration while addressing its risks and challenges for individuals and communities. BDUNNM commits to working closely with the Taskforce to support the implementation of the GCM in Bangladesh."

The Taskforce is co-chaired by the Ministry of Foreign Affairs and Ministry of Expatriates’ Welfare & Overseas Employment, and will lead the formulation of the implementation plan for GCM; communicate and promote GCM implementation to stakeholders; recommend harmonization and alignment of activities to avoid duplication and encourage complementarities in programming; plan and lead capacity building initiatives; facilitate coordination between ministries and agencies; facilitate submissions of joint advocacy positions; and lead the review and reporting on GCM implementation progress and include a follow-up mechanism. The BDUNNM will provide support to the Taskforce in all its activities.

Note to the Editor: