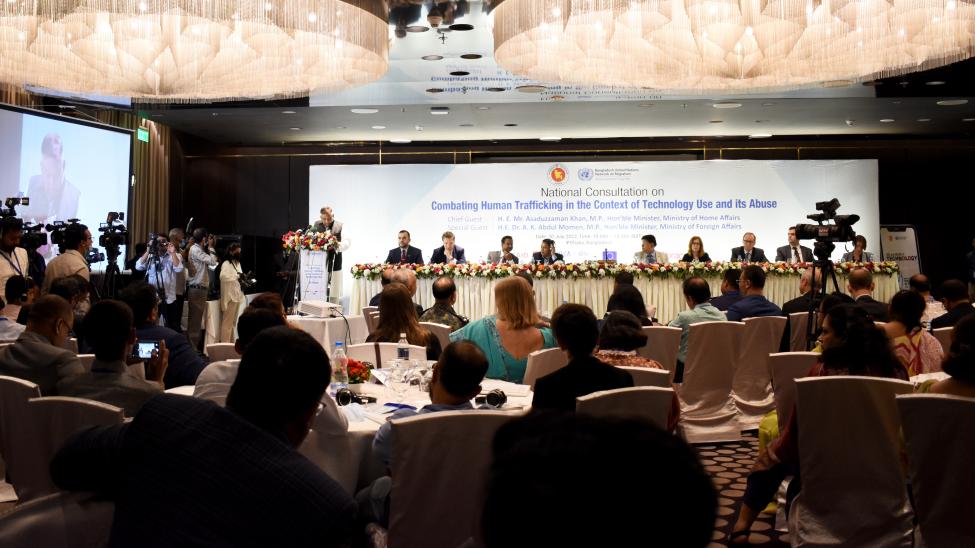 The scourge of human trafficking has expanded into cyber space as a result of the expansion of technology use around the world, which in turn has been accelerated by the COVID-19 pandemic and the transition of our daily lives to online platforms. It is imperative that efforts to combat human trafficking are coordinated both online and offline.

The theme of World Day Against Trafficking in Persons 2022 is “Use and Abuse of Technology,” and focuses on the role of technology as a tool that can both enable and combat human trafficking.

To mark the day, today on Saturday, the Ministry of Home Affairs (MoHA) and the Counter Trafficking in Persons Technical Working Group (CTIP-TWG) of the Bangladesh UN Network on Migration (BDUNNM) organized the National Consultation on "Combating Human Trafficking in the Context of Use of Technology and its Abuse". The consultation explored recent human trafficking trends in the context of COVID-19 and its aftermath and the trafficking in persons in cyberspace.

Participants at the consultation called on the Government of Bangladesh (GoB), international partners, the private sector, and civil society actors to focus their efforts on advancing a robust, rights-based approach aimed at preventing the exploitation of individuals by trafficking networks and shrinking the space in which they operate.

Bangladesh is a source, transit, and destination country for women, men and child victims of human trafficking. Bangladesh, though still ranking at “Tier 2”, the US State Department’s Trafficking in Persons (TIP) Report 2022 highlights significant progress in responding to TIP in Bangladesh through joint efforts of Government and non-government partners.

Asaduzzaman Khan, M.P., Minister of Home Affairs, said “Trafficking in persons is a serious human rights violation and the Government has a zero-tolerance policy on this. We are actively taking steps to fight this horrific crime. The fight against trafficking requires multi-stakeholder engagement.” “We will continue to work tirelessly to increase awareness around human trafficking utilizing the digital space,” he added.

Speaking at the national consultation, Foreign Minister, Dr. A.K. Abdul Momen, commented, " We need to keep in mind that human trafficking is a transboundary crime, and the traffickers may possess better technology than it is available in a particular country. We affirm our strong commitment to obligations under a series of other international and regional instruments linked to human trafficking”

Foreign Minister said, “The human traffickers equipped with technology can do greater harm. But the government agencies and relevant stakeholders can undo the efforts of the trafficker effectively with the help of technology.”

Due to the global economic contraction, job losses and difficulties earning livelihoods have amplified the risk of trafficking. In addition to root causes of human trafficking reportedly intensifying, Bangladesh has experienced an increase in the form of digital abuse and exploitation, with traffickers rapidly adjusting to the changing landscape.

Dr. Ahmed Munirus Saleheen, Secretary, Ministry of Expatriates’ Welfare and Overseas Employment, noted, “The Government of Bangladesh has sufficient law and policies to combat human trafficking. In addition, the Global Compact on Migration commits to eradicating trafficking in persons. We now need to ensure comprehensive efforts at national, regional, and global levels to implement these laws effectively and end this heinous crime.”

Technology allows criminals to operate across jurisdictions and more easily evade detection. Digital platforms offer traffickers tools to recruit, exploit, and control victims; organize their transport and accommodation; advertise victims and reach out to potential clients; communicate among perpetrators and hide criminal proceeds – and all that with great speed, cost-effectiveness, and anonymity.

Gwyn Lewis, UN Resident Coordinator in Bangladesh, noted, “Technology also presents a lot of potential as a tool to combat trafficking. The ability of law enforcement and the criminal justice system to use technology in their responses to trafficking will be crucial to the future success of efforts to eradicate human trafficking.”

Abdusattor Esoev, Chief of Mission of IOM & Coordinator of the Bangladesh UN Network on Migration, said, “Prevention and awareness-raising activities on the safe use of the internet and social media can help mitigate the online risk of trafficking. Cooperation with the private sector is important to harness their innovation and expertise in developing sustainable technology-based solutions to support prevention and combatting of human trafficking.”

Of the almost one million Bangladeshis migrating abroad every year, many vulnerable migrants are targeted by traffickers, and some are subject to debt bondage, forced labour, sexual exploitation, forced marriages and other forms of modern slavery.

The event of attended by key members of the diplomatic community in Bangladesh. Remarks were made by H.E. Robert Chatterton Dickson, the British High Commissioner to Bangladesh; H.E Ms. Nathalie Chuard, Ambassador of Switzerland to Bangladesh; H.E. Mr. Jeremy Opritesco, Charge d’Affaires of the Delegation of the European Union; and H.E. Mr. Scott Brandon, Acting Deputy Chief of Mission, US Embassy in Bangladesh.

Note to the Editor:
•    In 2019, the Bangladesh United Nations Network on Migration (BDUNNM) was established and, shortly afterwards, a Counter-Trafficking in Persons Technical Working Group was set up to provide advice and support on counter-trafficking measures. The Working Group is composed of civil society actors, non-governmental organizations (NGOs) and key UN agencies, working in a whole-of-society approach to combat human trafficking in Bangladesh, vis-à-vis the United Nations Global Plan of Action to Combat Trafficking in Persons and the Global Compact on Migration. The group meets monthly to identify priority areas in counter-trafficking programs, provide technical support, and ensure operational cooperation and coordination on key trafficking issues in Bangladesh.
•    This national consultation was organized and led by the Public Security Division of the Ministry of Home Affairs with technical support from the Counter Trafficking in Persons Technical Working Group (CTIP-TWG) of the Bangladesh United Nations Network on Migration and with financial support from the following projects and organizations from CTIP-TWG: a. "Global Action against Trafficking in Persons and the Smuggling of Migrants-Bangladesh (GLO.ACT-Bangladesh)" project funded by the EU and jointly implemented by UNODC and IOM, b. "A Comprehensive Counter Trafficking Program to Address Human Trafficking in Bangladesh" project implemented by IOM and funded by KOICA, c. SDC funded ILO Migration project; d. USAID-funded FS/TIP Project; and e. BRAC.