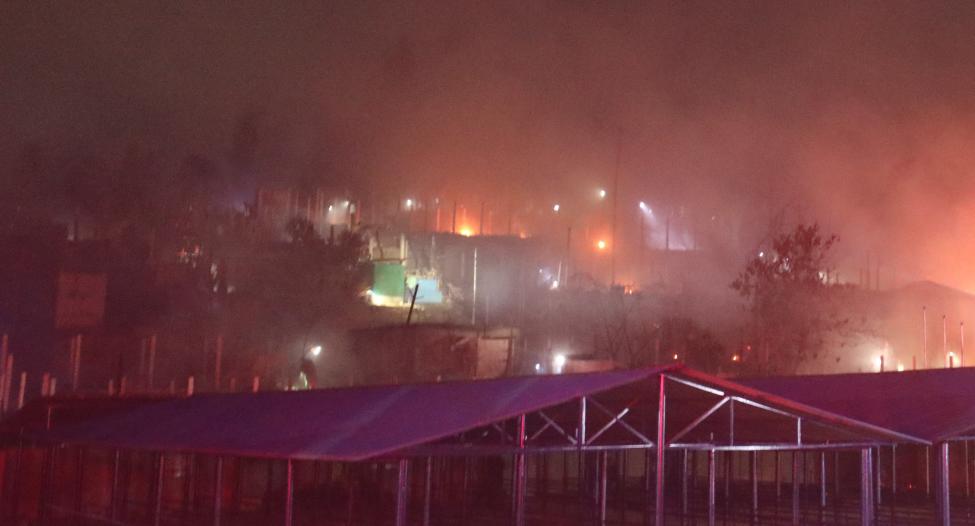 Cox’s Bazar – A significant fire swept through camp 16 under IOM’s area of responsibility in Cox’s Bazar on Sunday afternoon, impacting thousands of Rohingya refugees and host community members, and causing considerable damage to sections of the world’s largest refugee camp.

The fire was first reported just before 5.00 p.m. local time, and IOM immediately mobilized response teams to protect refugees and bring the situation back under control in coordination with the local authorities and fire brigade. The cause and origin of the fire is unknown at this stage.

At this stage no fatalities have been reported, though two people are reportedly injured by the fire.

This latest fire comes a week after another fire broke out in the refugee camp on 2 January causing significant damage to IOM’s Severe Acute Respiratory Infection and Isolation and Treatment Center (SARI ITC) in camp 20 Extension.

IOM in coordination with the humanitarian actors in Cox’s Bazar aims to conduct technical assessments as soon as possible to better assess the damage caused by the fire, and the immediate and longer-term needs of the affected people.

IOM currently has a mobile medical team on the ground to provide assistance as needed. Additionally, IOM through its communications with communities (CwC) team is being deployed within the camp to ensure people have access to right information.

IOM has taken immediate steps to mobilize non-food item (NFI) kits for all affected households- which are being supplemented with blankets to help those affected to keep warm amidst the cold dry weather in Cox’s Bazar.

“We are coordinating with other humanitarian actors to ensure that those affected are provided with food, health, protection, water, sanitation, and hygiene needs. Shelter repair/rebuilding and access to cooking facilities – in the form of LPG are top priorities as the affected families seek to recover from the damages caused by the fire,” said Nusrath Ghazzali, officer-in-charge for IOM Bangladesh.

The conditions in the camps make large fires a real risk. In March 2021, a massive fire that broke out in the camp resulted in loss of life, displaced 45,000 Rohingya refugees and caused catastrophic damage to the world’s largest refugee camp.