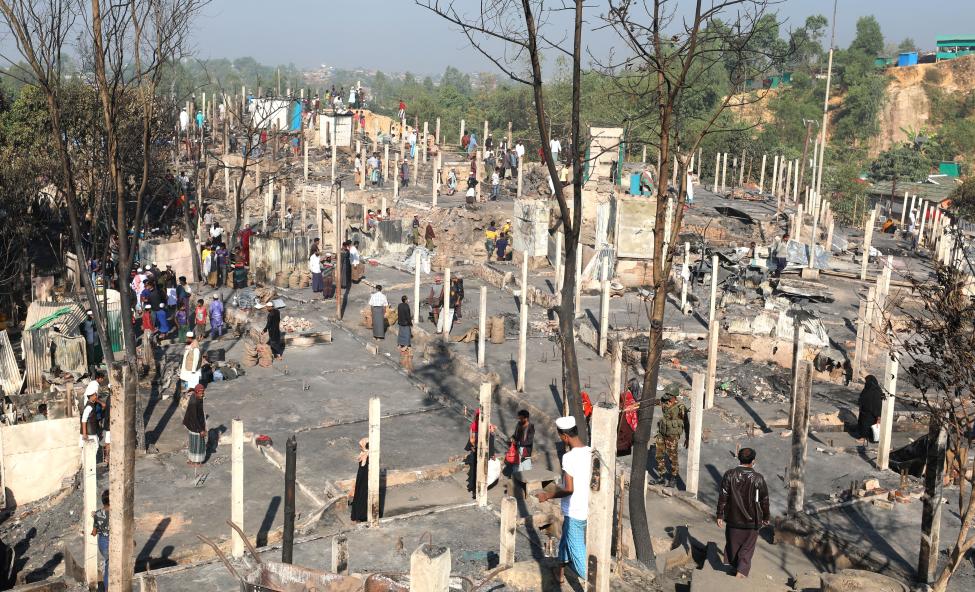 The fire affected more than 1,700 refugees and members of the host community, and caused considerable damage to sections of the world’s largest refugee camp. Thankfully, no fatalities have been reported to date as a result of the fire.

IOM, in coordination with other humanitarian agencies, has erected more than 150 emergency tents for affected families. Additionally, over 190 temporary shelter support kits - tarpaulins, bamboos and rope – have been provided. The IOM volunteers continue to help affected families build their temporary shelters. Since the fire, over 400 Rohingya volunteers have been mobilized to support, including to assist in the removal of a significant quantity of fire debris.

“Many refugees lost their shelters and all of their belongings, and witnesses are obviously experiencing a combination of fear, despair and hopelessness. We cannot let them lose hope; IOM was on the ground within hours of the fire supporting all those affected with critical assistance, and this support will continue until a level of normalcy has returned,” said Nihan Erdogan, IOM’s Deputy Chief of Mission (Emergencies).

Cox’s Bazar is the largest refugee settlement in the world, home to almost 900,000 refugees. This latest blaze comes a week after another fire broke out in camp 20 Extension, causing significant damage to IOM’s Severe Acute Respiratory Infection Isolation and Treatment Center.

The conditions in the camps make large fires a real risk, especially in the dry season. In March 2021, a massive fire that broke out in the camp, resulting in loss of life, displacing 45,000 people and inflicting catastrophic damage to the camp.

For more information, please contact Tarek Mahmud in Cox’s Bazar at tmahmud@iom.int or Md Sariful Islam in Dhaka at mdsislam@iom.int