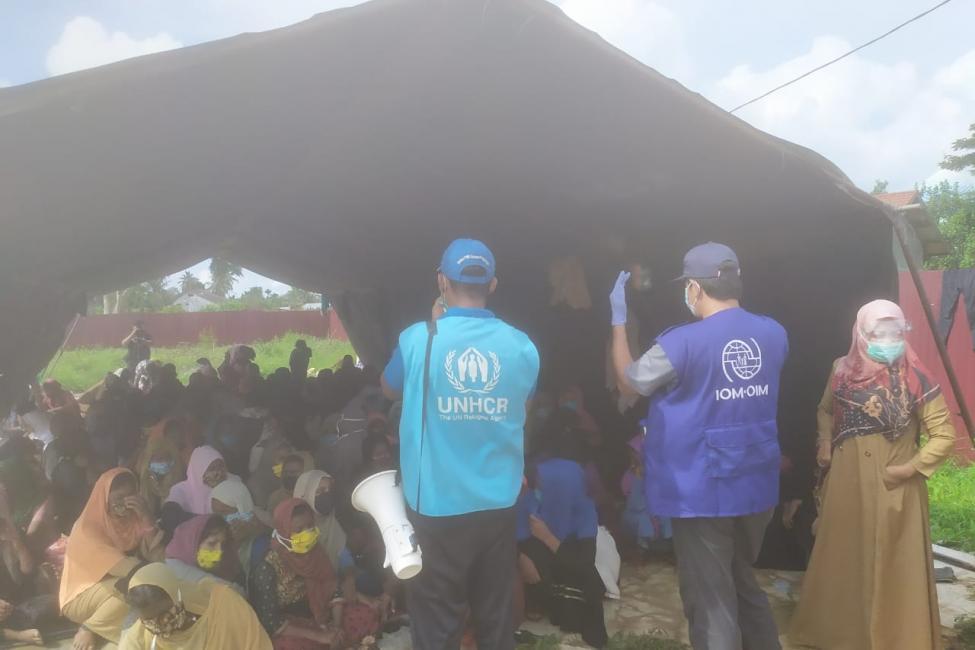 North Aceh, Indonesia – After more than seven months stranded at sea under increasingly dire conditions, the largest group of Rohingya refugees to arrive in Indonesia since the Andaman Sea crisis in 2015, are receiving support from local authorities supported by the International Organization for Migration (IOM), UNHCR and partners.

The 296 Rohingya – primarily women and children—landed in northern Aceh early Monday morning (07-09) and are under the care of local authorities. IOM currently is supporting the Government to ensure that all arrivals receive rapid COVID-19 tests, as required by Indonesian authorities. IOM is accompanying that process and assisting in finding suitable and safe accommodations for all.

This latest arrival follows the 24 June landing of 99 Rohingya, also in northern Aceh. Initial indications, to be confirmed with further interviews, are that Monday’s arrivals are part of that same group, originating from a single ‘mother’ ship that has been at sea for over half the year.

Speaking to IOM staff, a spokesperson for the group said they had been at sea for over seven months and all reached the larger vessel via smaller boats before setting off for Malaysia.

A 20-year-old single woman said she had left Balukhali refugee camp in Cox’s Bazar, Bangladesh, nearly eight months ago with the intention of reaching Malaysia. There she has relatives. She estimated that there were at least 500 people on the larger vessel. She estimated some 30 people, including a very small child, had died over the many months at sea, mainly from various illnesses.

She added that twice during this period, two groups of people left the ship in small boats: one headed for Indonesia and the other for Malaysia. IOM believes these could be the two boats that landed on 8 June and 24 June, respectively in Langkawi, Malaysia and North Aceh. They were carrying 269 Rohingya to Malaysia and the 99 who landed in North Aceh.

A 27-year-old man said he left behind a wife and children in Kutupalong refugee camp in Cox’s Bazar, Bangladesh, explaining: “I left Bangladesh six months ago, and my destination was Malaysia.”

He said he left Teknaf, by small boat, together with several more Rohingya. They joined a larger ship out at sea, further corroborating that there were over 500 Rohingyas in the larger vessel.

“We received meals twice a day – morning and evening – but the rations were very inadequate. Sometimes, we had to fast, due to breakdown in the supply chain. Supplies used to come by fishing boats.”  He said he paid Taka 40,000 (approx. USD 2,380) to get to Malaysia and that his relatives would then pay an additional Taka 250,000 (approx. USD 14,900) in Bangladesh after he had reached Malaysia.

“As far I know, there are no other Rohingya boats floating in the sea now. I feel very happy to be on the land and alive. I thought, we would not be able to make it,” he said.

Nenette Motus, the Regional Director for IOM in Asia and the Pacific said, “These latest arrivals highlight the urgent need to continue to monitor and support safe disembarkation for refugees and migrants. We must avoid at all costs, unnecessary death at sea by implementing clear mechanisms for the international community to ensure that we have the necessary support for the safety and security of all who need support.”

Louis Hoffmann, IOM Chief of Mission in Indonesia, commended the efforts of the Government, local authorities and agencies and most of all, the people of North Aceh, who had once again welcomed the Rohingya. “There have been indications of more people at sea for some time now, and amid the challenges of fighting the coronavirus pandemic, there has been some concern that people be able to disembark and be provided the protection and assistance they need,” said Hoffmann.

He added, “For the second time in the past few months, IOM applauds the government and local community in Indonesia for reaching out, in humanitarian spirit, and not only providing a welcome door but also sustaining assistance to those who have needed protection. We are very pleased to see this latest group safe on land and receiving the care they need.”

Hoffmann reiterated IOM’s commitment to assisting the government with these needs, starting with health screening alongside local authorities. “We will continue to work with partners to ensure shelter, water, and core needs are met in the coming days,” Hoffmann said.

IOM’s emergency response to support the Rohingya in Aceh is funded by the European Union Civil Protection and Humanitarian Aid (ECHO) and the US Department of State Population, Refugees, and Migration.